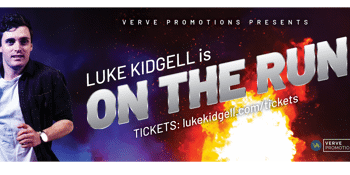 CANCELLED - Luke Kidgell - On The Run

Indian Ocean Hotel (Scarborough, WA)
Saturday, 20 June 2020 8:00 pm
24 days away
18 Plus
Comedy
Comedy
Send this event to
Now with 3 National Tours under his belt Luke Kidgell has amassed, over 500,000 fans online, a national radio show and two of the most popular comedy podcasts in the country. It's almost unfair that his body is a work of art, due to countless hours of grinding in the world gym. It is undeniable that Luke Kidgell is one of the biggest and most physically elite comedy entertainers in the country. The man is a rare specimen, on and off the stage.
However this year Luke's life was turned upside down. While writing this new show, he went and tried some new jokes at comedy clubs and what happened next would change his career forever. He straight up killed... like murdered, even harder than he usually does. And now he is on the run! Wanted for arson, for lighting up various comedy venues around the country with jokes so killer that he had to become a fugitive.
So don't miss out on seeing this renegade, before he gets locked up, because in 2020, Luke Kidgell is officially On The Run.