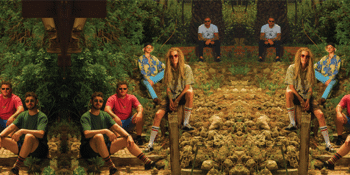 Sivart, Club Sentimental, Mirrors At The Arcade
Indian Ocean Hotel (Scarborough, WA)
Friday, 12 February 2021 8:00 pm
20 days away
18 Plus
Music
Music
Send this event to
Indigo continue their celebrations as they launch their new single ‘Everybody Knows’ on February 12th 2021 at The Indian Ocean Hotel, Scarborough.  Supported by Mirrors At The Arcade, Club Sentimental & Sivart.

“This would be the quickest I've ever written a song,” says singer/guitarist Christopher Kinna of Indigo's latest single, Everybody Knows. Exploring themes of mental health and spirituality, Everybody Knows is as much a social commentary as it is a feel good summer anthem – complete with sweet pop melodies and an irresistible breezy swagger. Lyrically touching on the sentiment that ultimately nobody knows what they are doing, Everybody Knows is playful yet poignant... a song that gives you something to think about, or dance to, in equal measure.

Like all good songs, Everybody Knows seemed to write itself. “It literally came to me within seconds,” Kinna reveals. “It’s basically a satirical statement about looking inward, and how people can have the answer to someone else's problems but not their own,” he says. But the existential heaviness of Everybody Knows is nicely balanced by the lightness of the melodies that surround it. For all its contemplation, it is a carefree, happy song. All up, it is an interesting new addition to the band's growing list of catchy singles, following on from 2019's fan favourite La Luna.

But where La Luna was darker in tone, more melancholic and driven by gloriously '80s-sounding synths, Everybody Knows is decidedly more stripped-back and organic than its retro-futuristic predecessor. It is indie rock at its finest. Every member of the band's skillful personnel is giving it their all. Supporting Kinna's role as frontman is the band's guitarists, Dylan Keirnan and Raurke George. Behind them, bassist David Williams and drummer Joshua Beaumont provide the song's lifeblood: its effortlessly smooth dance floor rhythm.

Beginning life as a duo back in 2012, Indigo have been on a path defined by artistic growth and evolution. This is only set to continue. Having already well-earned a reputation as one of Perth's most promising acts, they are a band on a mission. 2020 has certainly been the most unusual year on record, but Indigo have made the most of it. With Everybody Knows under their belt, the band are looking forward to the New Year with optimism and ambition. It's time to get back to work. Back on stage and back on the road.