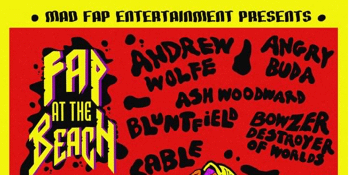 FAP AT THE BEACH

Indian Ocean Hotel (Scarborough, WA)
Sunday, 13 December 2020 7:00 pm
47 days away
18 Plus
Music
Music
Send this event to
After an absolute shitstorm of a year Mad Fap Entertainment brings our final event of 2020 to the Indi Bar with FAP AT THE BEACH. Featuring a mix of artists from a range of styles and hosted by ASH WOODWARD with OPEN MIC at the end, FAP AT THE BEACH includes the northern suburbs launch of new release RED KELLY by BLUNTFIELD and goes down SUNDAY DEC 13TH at the INDIAN OCEAN HOTEL in SCARBOROUGH.

Bring ya bathing suits, good vibes and party energy to Scarborough for a 2020 finale Sunday Sesh with FAP AT THE BEACH, celebrating some of the freshest artists in Western Australia!

* Respect the venue for putting these shows on, especially during a frenzied pandemic era. Zero tolerance for antisocial behavior, tagging toilets or general fuckery. *